First Sprint Results - I nailed it!

I finished my first sprint as an Agile Writer yesterday. I completed 39 points, and I'm pretty sure it took more than 15 hours. As with any process, there will be constant refinement with regards to how much I can do in a sprint, and how to assign points to the various tasks.

But one thing I know for certain: I worked a lot harder on my writing this sprint than I have in a while, and I felt like that work was either more productive or less futile (depending on my state of mind.

Here is a screen shot of the results: 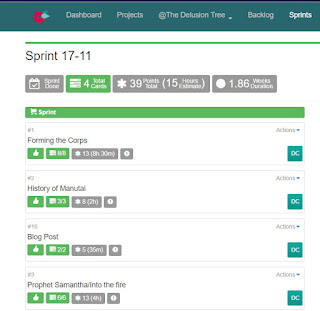 And here is a screen shot of my coming sprint. there are a lot more tasks, plus some reading and research work thrown in as well. This sprint will be good for 46 points, which means it will be a nice stretch.

If this blog were your sole window into my life, you would think that nothing is going on. But this couldn't be further from the truth. Life has been incredibly busy.

The challenge I face -- the challenge I have always faced and will likely face until the very end --  is that I have so much going on it's nearly impossible to keep up with everything.

I have tried simplifying my life, but I'm not sure I can cut back any further without causing real harm to important responsibilities. (That's another blog post for another day.)

My life outside of work - what I have begun referring to as "Discretionary Time" (because time is never free...) - is a bit of a jumbled mess. I feel as though many of the activities I spend my time on aren't really moving me towards my long-term goal. (I've named that goal Project Sisyphus - another post for another day.)

In my job as a software engineer, we have adopted a management framework known as Agile Development. It has made a huge difference in the way our development team works. From my perspective, those differences have been overwhelmingly positive.

I've decided to experiment with applying some of the agile development methodologies to my writing life -- namely Scrum. I chose Scrum for two reasons. First, I'm familiar with it. Second, it excels at dealing with projects that have stalled out.

Scrum isn't a perfect fit; for one thing, the methodology is designed for small teams rather than individuals. But the principles of defining an Epic, dividing the Epic into Stories, and breaking the Stories into Tasks, is very similar to the way I write already. Combine that with the concept of a Sprint (a two-week effort with a pre-defined list of tasks to be completed) and I think this is a great tool to help me focus on my most important writing tasks.

As an added bonus, Scrum prescribes that stories are assigned point values. Points! Which means that, at least in part, scrum is a way to make a game out of work.

I will be finishing my very first sprint tomorrow. How am I doing? I'll post a Sprint Review on Sunday, but I can tell you that during the sprint I have completed rewriting one very difficult scene, and am about 600 words away from finishing the other. I have a solid new backstory for a major world building element.

That's right - I wrote this blog post because it was on my schedule for this Sprint, and I don't want to end the sprint without finishing the work I promised myself I would do. Proof positive that this Agile Writing thing is already making a difference.