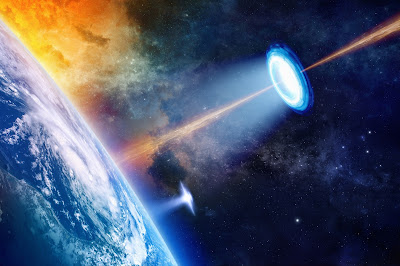 Last September, I set a goal to write a book - start to finish - within one year.

This is significant for me, since I've only finished three books in the fifteen years I've been writing. (That's an average of five years per book, for those who prefer not to do the math.)

Admittedly, a large part of my early writing years was devoted to developing skills and finding an acceptable Author Voice. It was a time for practice, rather than performance.

But at this point in my writing career, I feel an overwhelming urge to shift into a performance phase. Hence the goal to write a book in a year.

I have made several conscious decisions that I hope will allow me to hit this goal. Foremost is the decision to write a middle-grade novel.

I've wanted to write middle-grade for some time. The Space Corps General started out as middle-grade before ballooning out of control. I love the idea of visiting schools and doing presentations. I believe middle-grade is the right genre for me.

Fortunately, middle-grade books are, by definition, shorter than adult and YA books (50,000 words vs 80-100,000 words). Shorter means (hopefully) faster to write.

The second decision I made was to pick a high-concept story, and stick close to established tropes. The beauty of a high-concept idea is that it can be easily communicated, and provides some very powerful focus. The concept for Graviton Rift is: "The Parent Trap re-imagined as an interplanetary adventure."

I made this decision after trying to pitch The Space Corps General, and having a tough time describing what the book really was all about. There are a lot of great elements in that story, but like I mentioned earlier, it ballooned out of control. By focusing on a high-concept idea and the associated tropes, I believe I am creating a much better story, and spending less time wandering through literary wastelands in the process.

The third decision I made was to participate in NaNoWriMo. If I could write the first draft of the novel in a month, then I would be well on my way towards a final draft in a year. 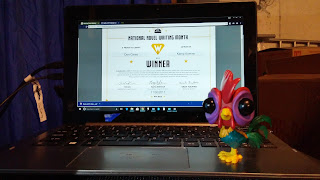 It actually took me 45 days to get a completed rough draft, but I was able to put down the required 50,000 words during the month of November. I won! (With a little help from HeiHei)

But the real work begins after the NaNo win. The fourth decision I made was to spend a minimum of five hours per week editing and revising. (I really want ten hours per week, but for now that remains a bit of a pipe dream.)

For the most part, I've been able to hit that goal, and I have seen slow but steady progress in this revision. As a result, I am about 60% of the way through my second draft. It's not where I want to be, and success is anything but certain. I still need to give this story to beta readers and then do at least one more draft.

But if I stick to my current pace, and maybe somehow manage to eke out a little bit more, I just might hit this goal. More importantly, I have proven to myself that it is possible.

I love this story. I love the characters. I'm thrilled at the prospect of finishing a book, idea to final draft, within a year. I can't wait to share the final product with you.